One weekend last month, I attended an amazing gathering so ultra-nerdy that, according to someone living with me who will remain anonymous, “it makes the World Fantasy Convention look cool.” Hmm . . . Well, I’m talking, of course, about the Annual International Gathering of Typewriter Collectors. I don’t think anyone really knows what the proper name of it is. It’s commonly referred to simply as “Herman’s” — “Are you going to Herman’s this year?” — because Herman is our gracious host, the owner of the museum where it’s held each fall, where something like nine hundred (900) rare, vintage, and antique typewriters and related paraphernalia are on display. Nearly a hundred of us gathered this time — my first time, in fact — some from as far away as Italy, South America, Toronto, and the West Coast, as well as from points all across the U.S. And it is a GATHERING! 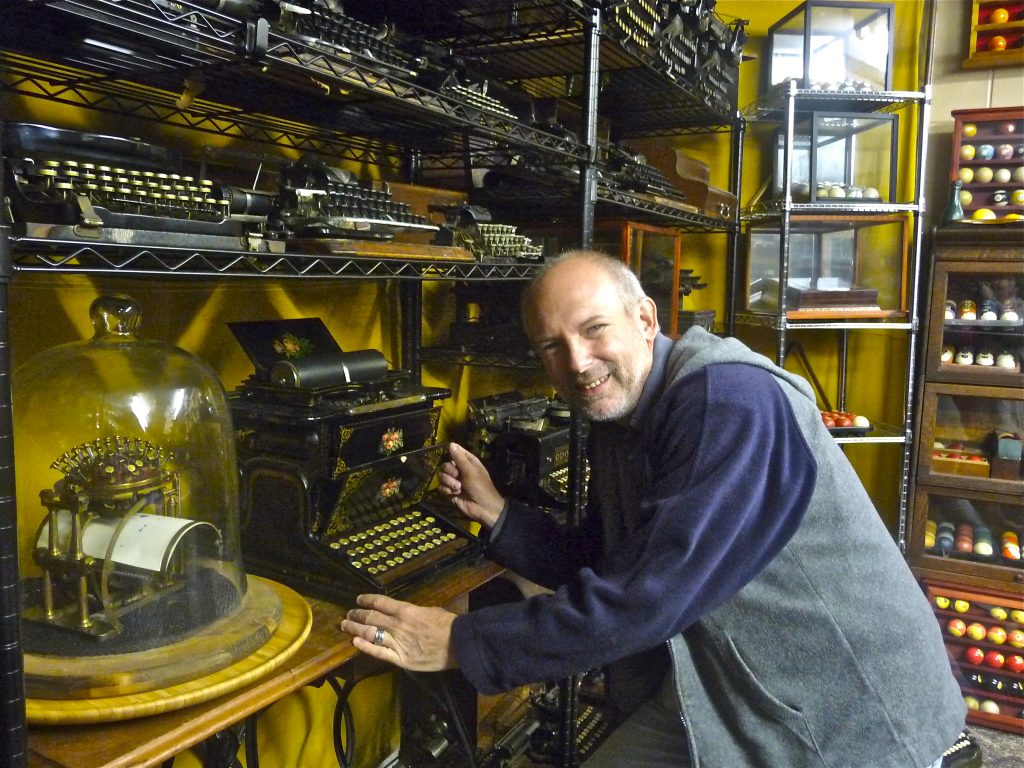 I am pictured here with a working Sholes & Glidden Type Writer, first manufactured by the Remington Arms Company and sold commercially beginning in 1874.

In the above photo, to the left of the Sholes & Glidden is a replica of the Malling-Hansen Writing Ball, patented in 1870, a machine famously used by Friedrich Nietzsche. 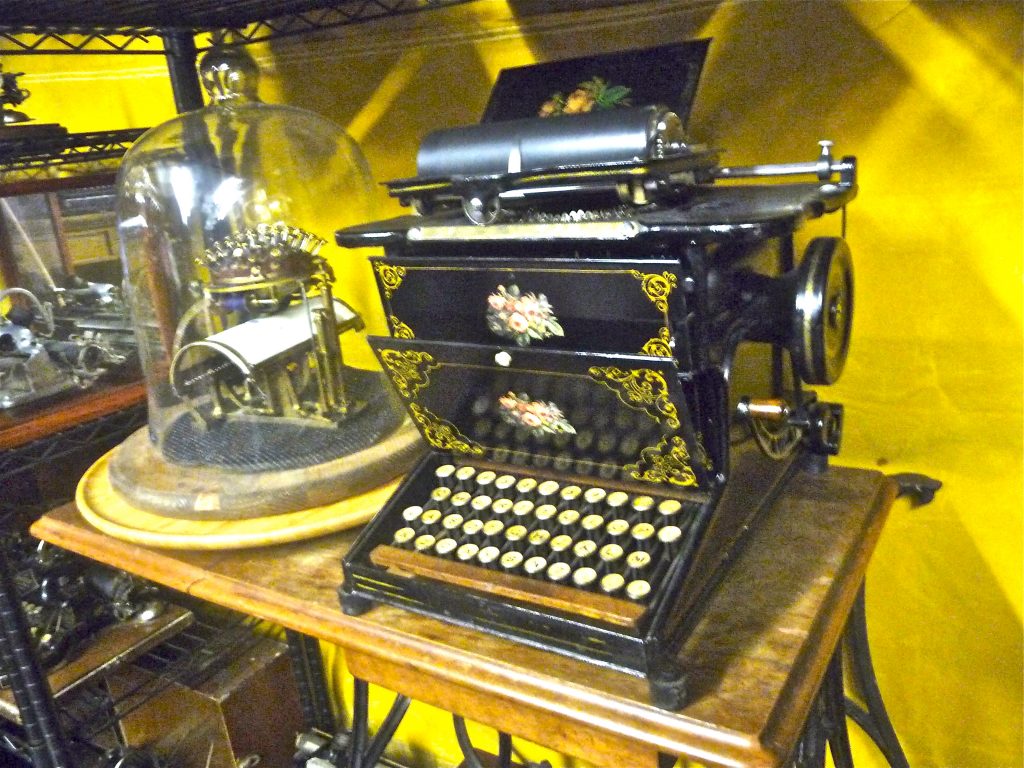 Here’s a better look at the Sholes & Glidden Type Writer. Christopher Latham Sholes — or perhaps a close relative of his — created the QWERTY keyboard; it appears on this machine and is still the keyboard layout most common today.

It was a weekend filled with activity: lots of buying, selling, and trading . . . presentations on typewriter history . . . typewriter repairs and consultations . . . lively discussions . . . speed-typing contests . . . merry eating and drinking . . . a typewriter beauty contest . . . two screenings of the fantastic new documentary California Typewriter, starring typewriter enthusiast Tom Hanks . . . and best of all, the conversations, from early till quite late — the kindling and rekindling of friendships. 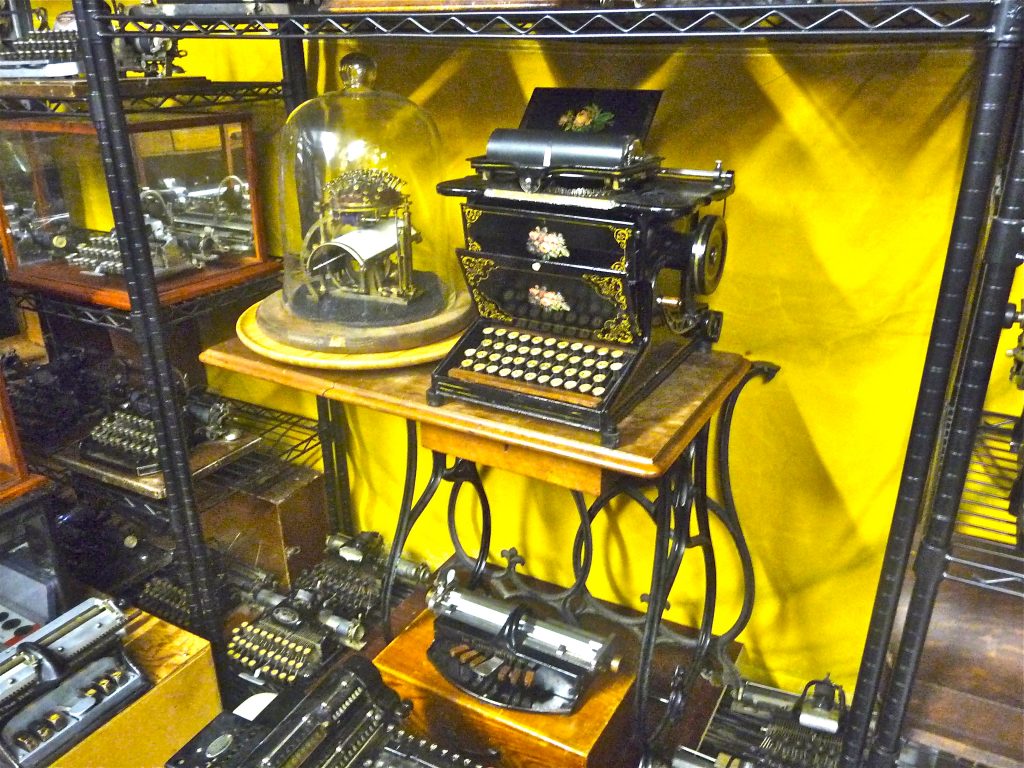 The Sholes & Glidden was mounted on the Remington sewing machine table; the foot treadle operated the carriage-return mechanism. With the Civil War over and the demand for firearms greatly decreased, Remington had to find something else to produce — and they found typewriters!

It was great to meet many friends I’d previously known only through correspondence. 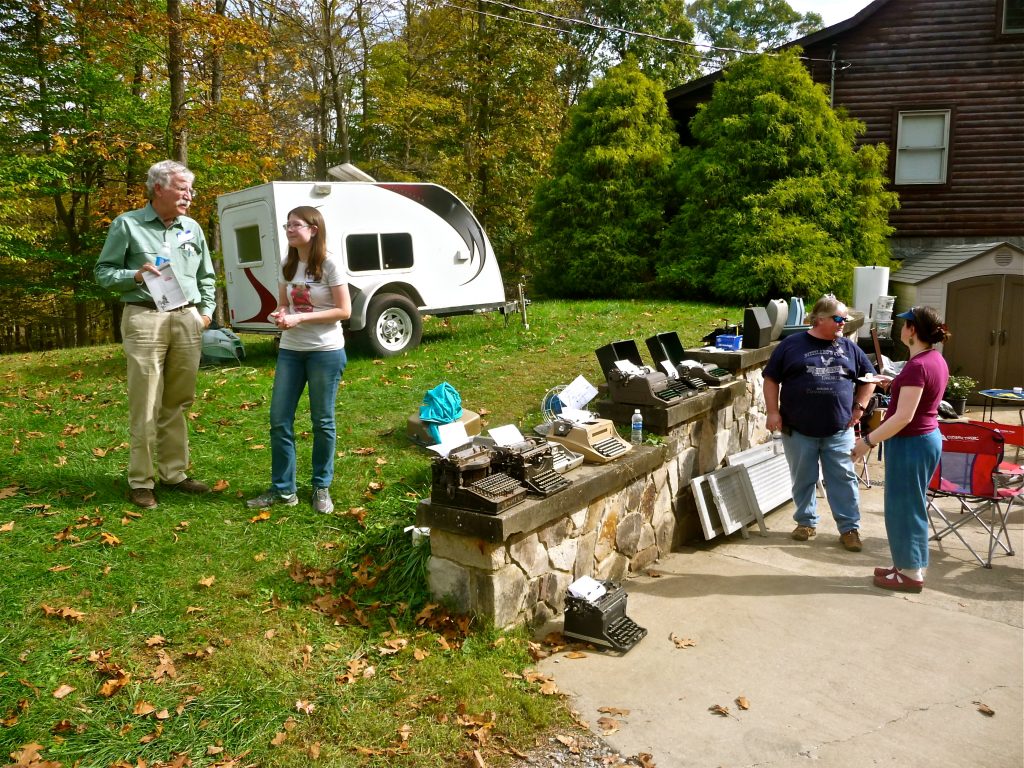 One event was a silent auction, with typewriters to bid on lined up here. (No, I didn’t buy any . . . of these.)

Here’s a Hammond, the kind of typewriter that J. R. R. Tolkien particularly favored, perhaps because it doesn’t matter how hard or softly you tap the keys — you get a nice, uniform print: 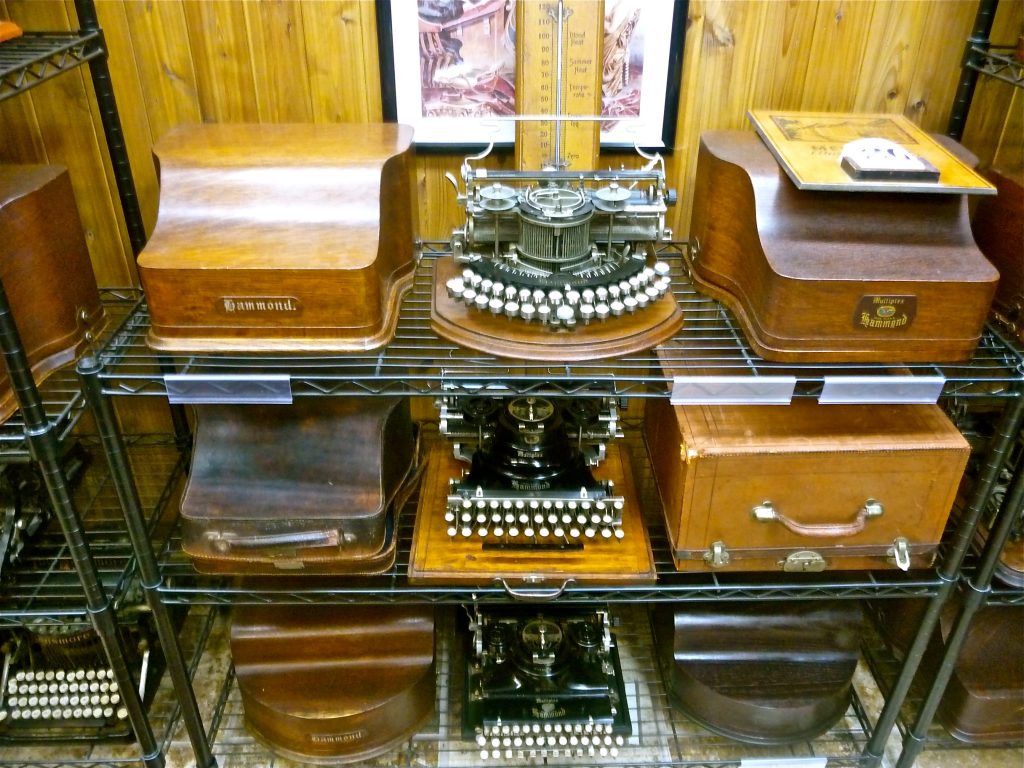 Hammond: with its type shuttle (as opposed to typebars), it was a kind of forerunner of the much later IBM Selectric. 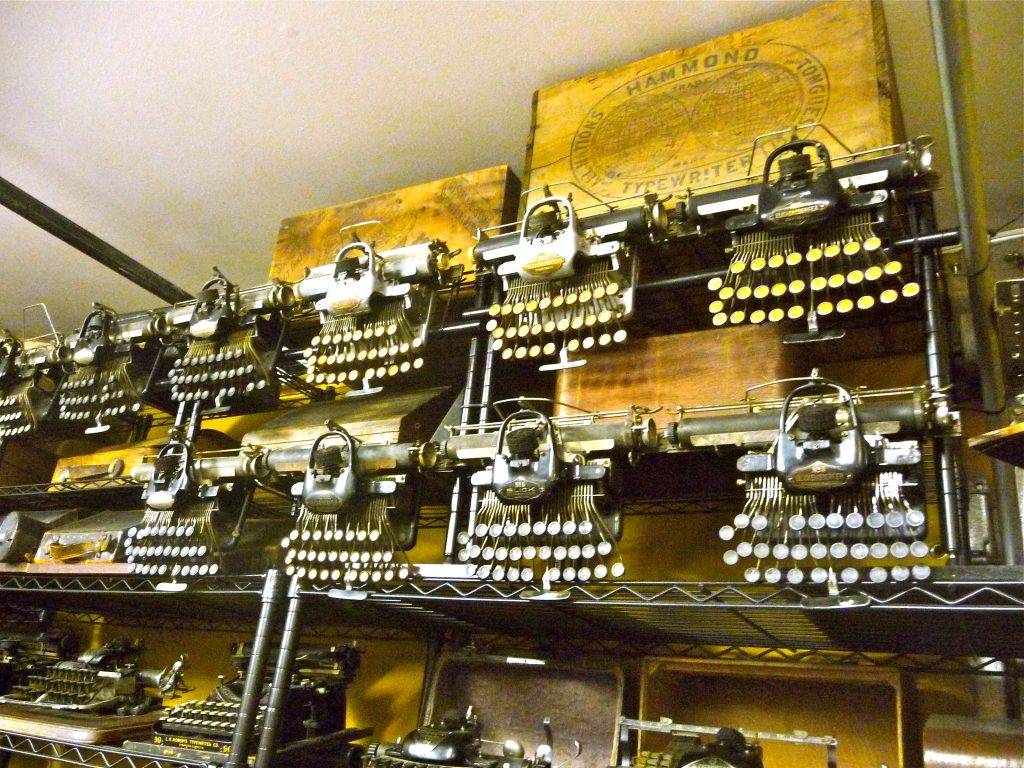 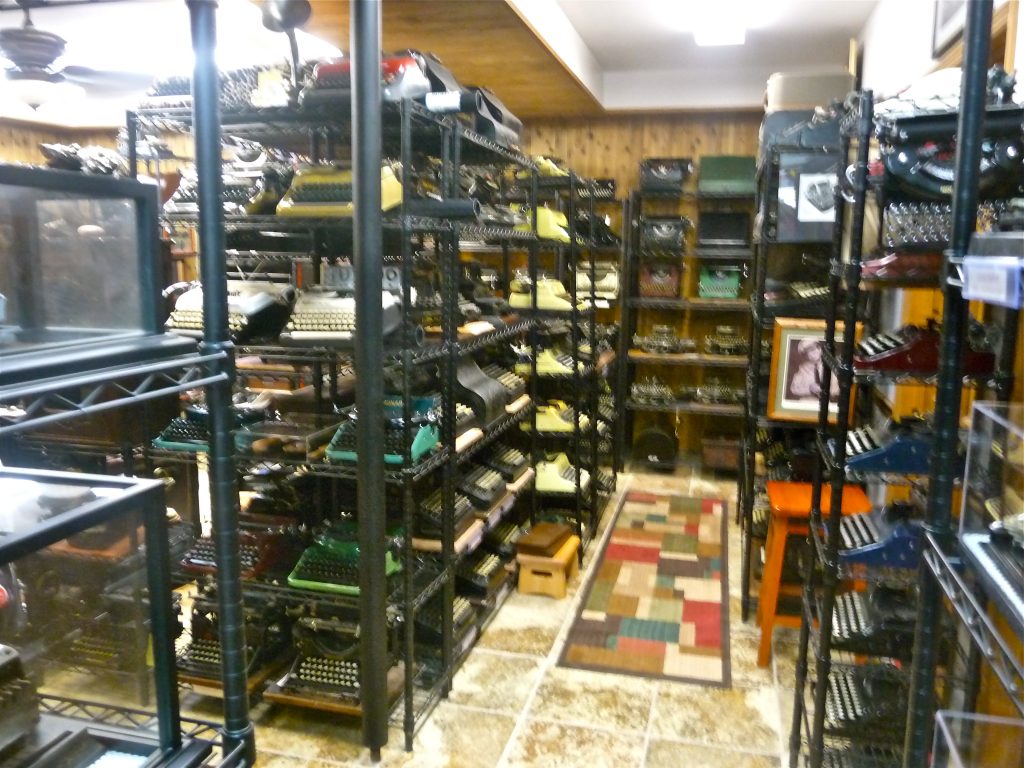 Shelves and shelves of history 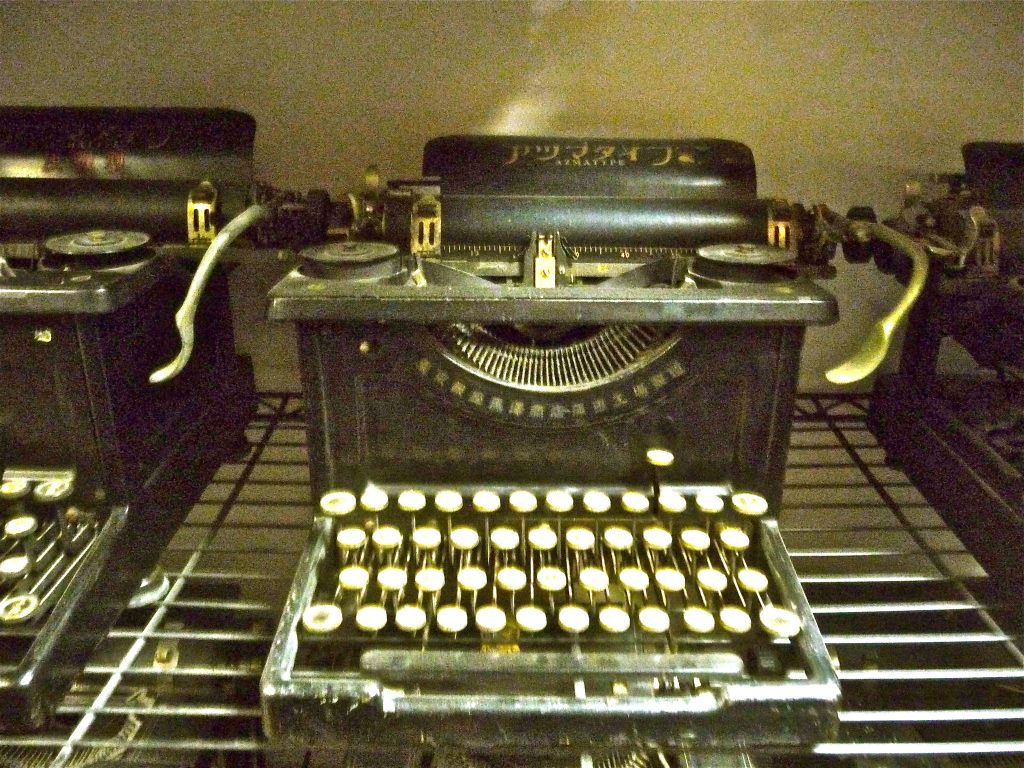 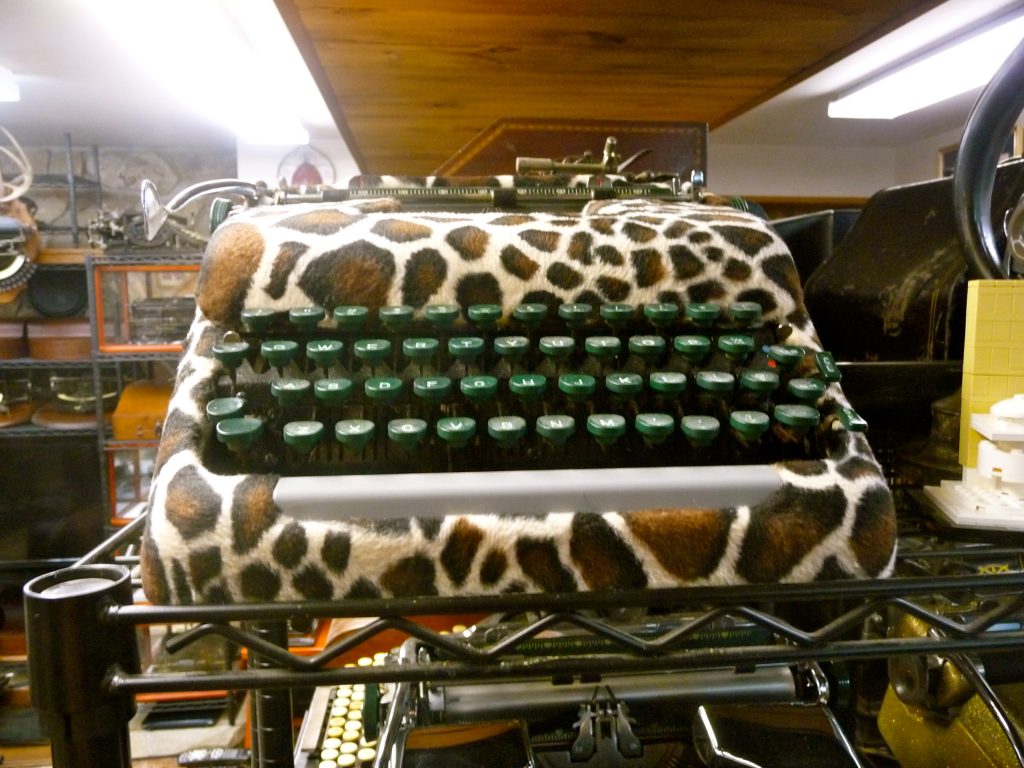 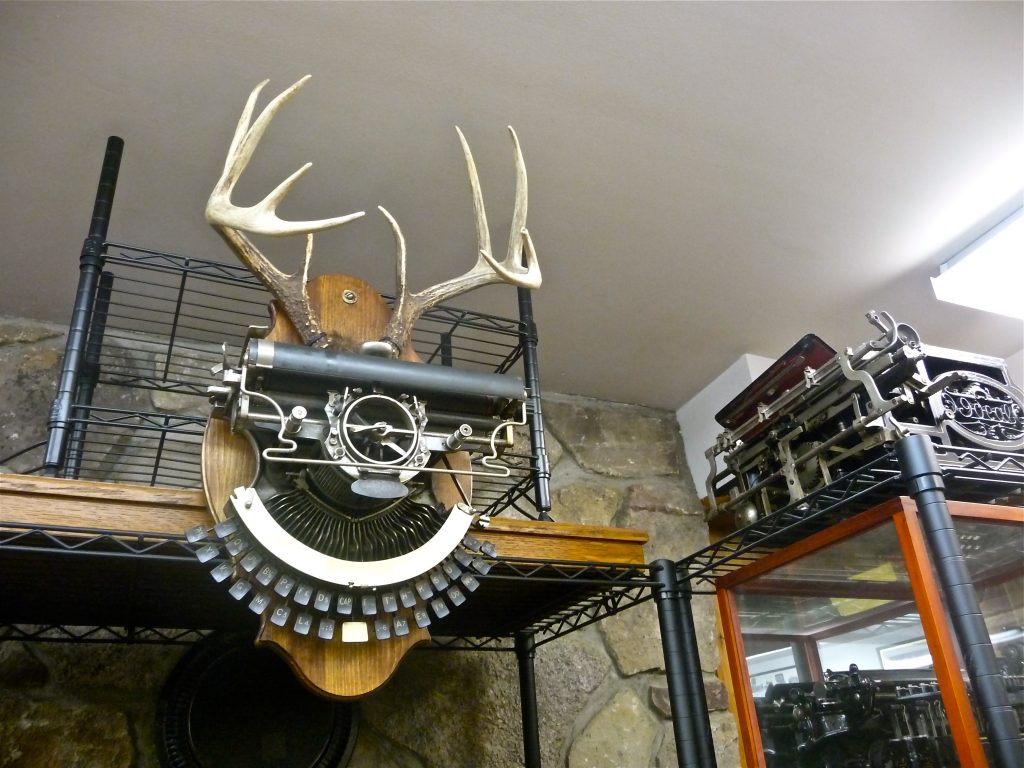 Is that ten-point type? 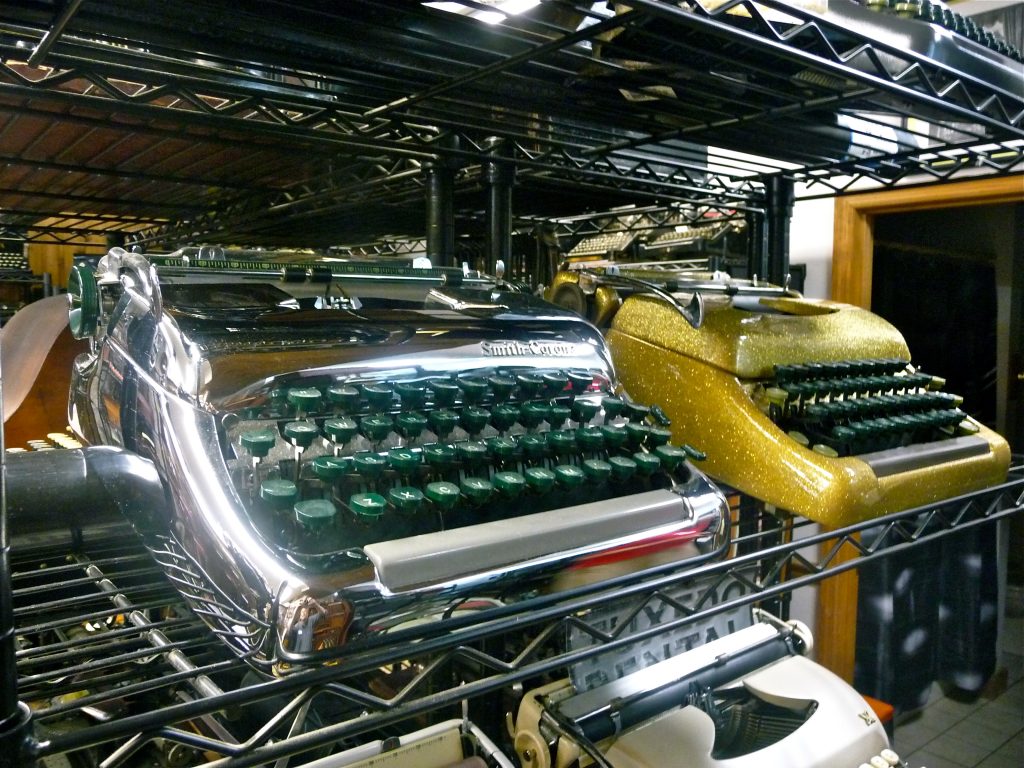 When writers need to reflect

‘Twas a wonderful time had by all. 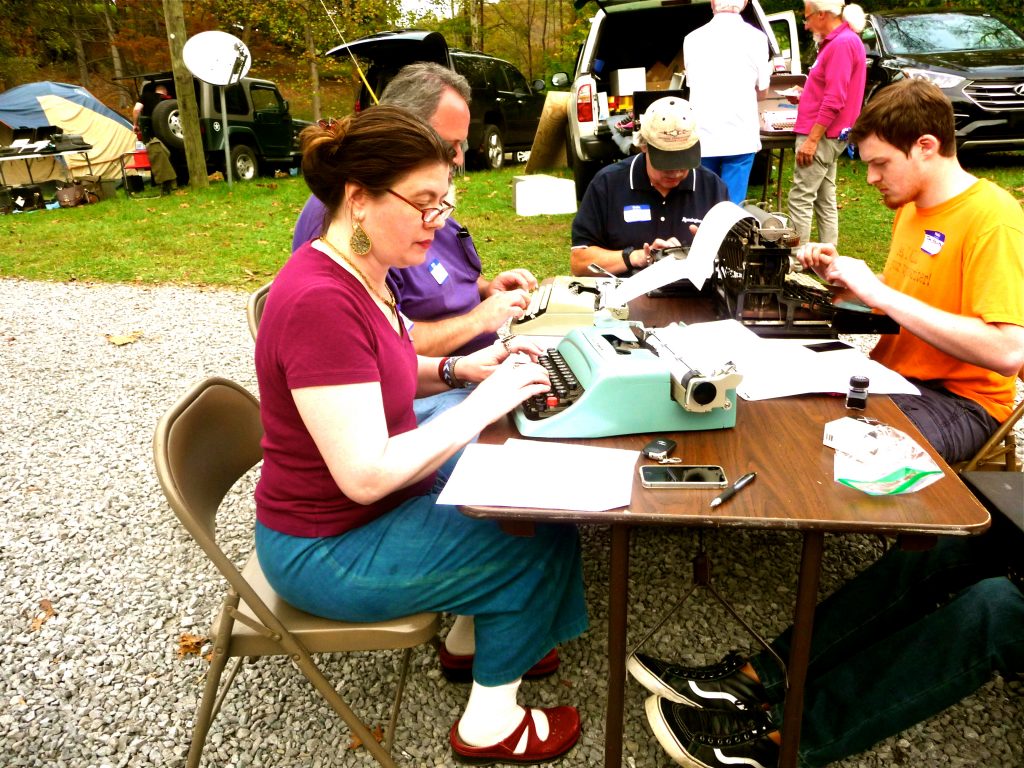 Anyway — I had to prove to my friend Mr. Brown Snowflake that typewriters don’t hinder blogging at all. Sometimes they provide grist. We had fun taking some into my wife’s classrooms, too, for students to use in creative writing assignments: 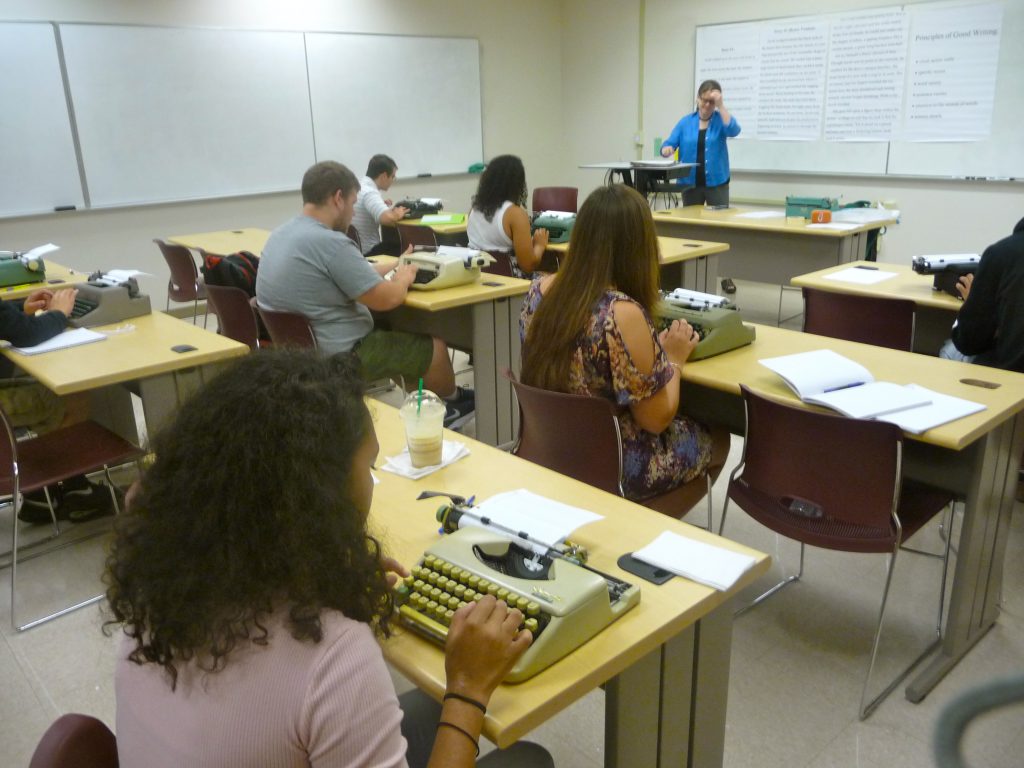 Typewriters in the college classroom — students loved them!

Then there were the poems-on-demand I typed for customers on the spot at the recent local BookFest: 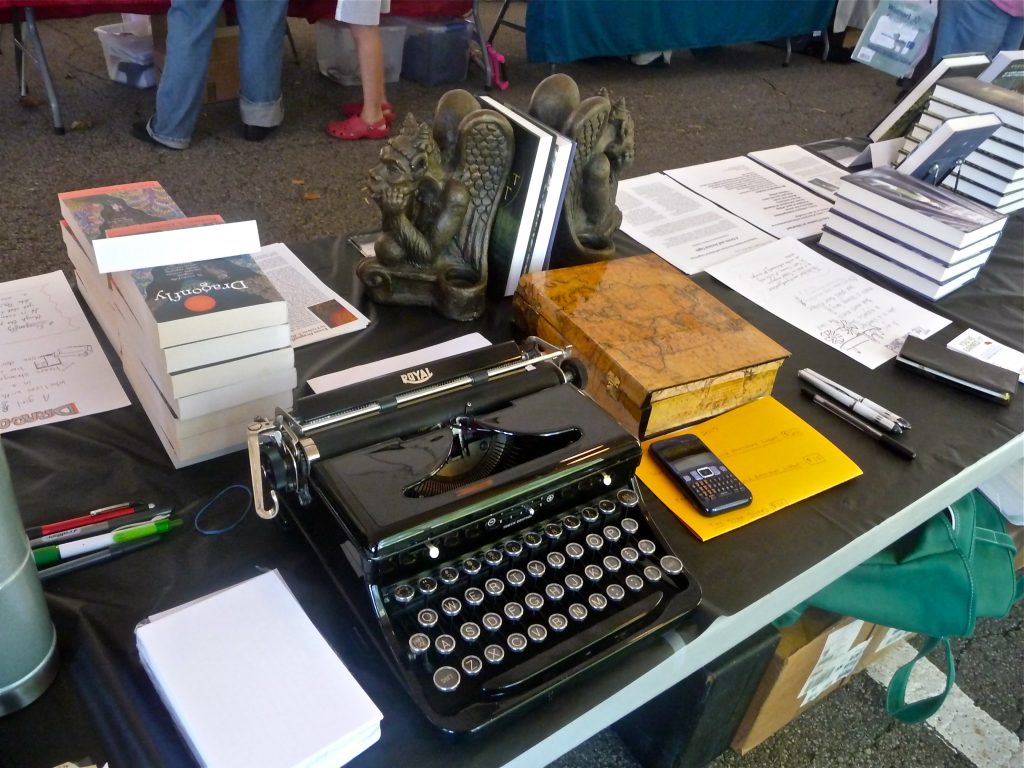 I may not manage to post as often as in the old days, but I’m still here. The lights are on, and there’s coffee.