Did you know that Tom Hanks is an avid typewriter enthusiast? Yes, Tom Hanks the movie star — he introduced the highly popular Hanx Writer app, a touchscreen typewriter that apparently comes in three varieties. But beyond helping us approach the typewriter through our digital devices, Mr. Hanks loves the old machines themselves. I give you his words, as quoted by Richard Polt in The Typewriter Revolution: A Typist’s Companion for the 21st Century:

“Computer keyboards make a mousy tappy tap tappy tap like ones you hear in a Starbucks — work may be getting done but it sounds cozy and small, like knitting needles creating a pair of socks. Everything you type on a typewriter sounds grand, the words forming in mini-explosions of SHOOK SHOOK SHOOK.” — Tom Hanks

I won’t say “museum,” because these machines work around here, as they were built to do. They’re in their prime! Here are my three “Great Old Ones” — Underwood, Smith, and Royal.

I’m finding that I have no trouble switching back and forth between computer keyboarding and typewriter typing. Mrs. Bowman’s class in high school still serves me well! I even adjust the spaces after periods without any trouble — two spaces on a typewriter, one on a computer. 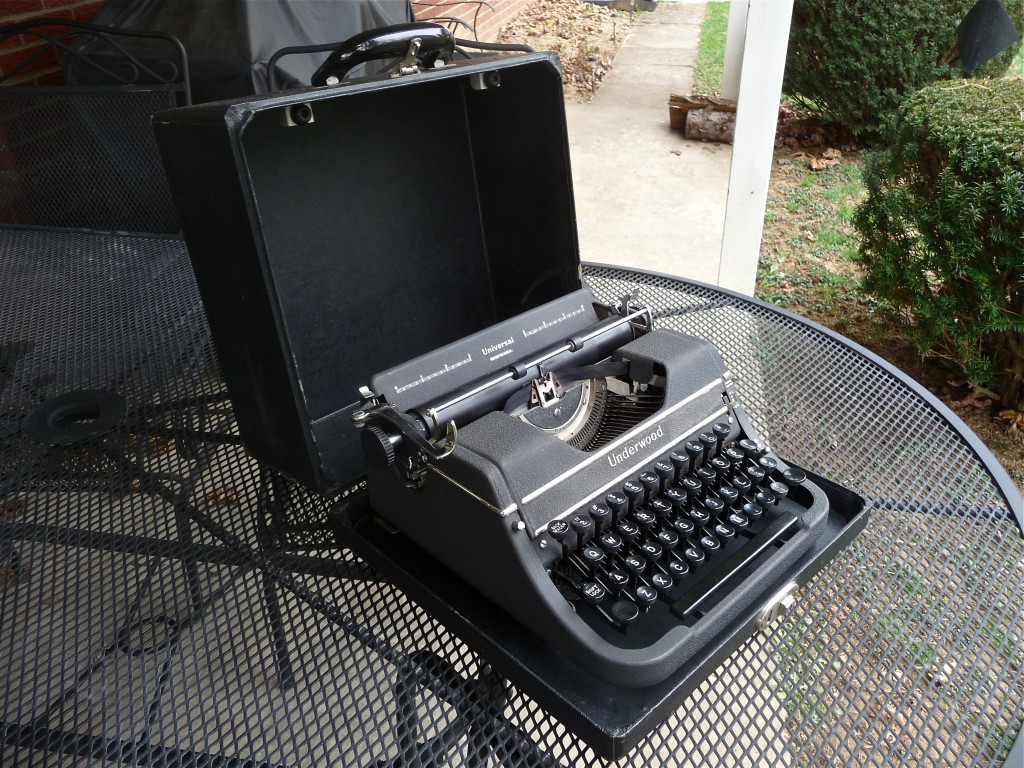 Snappy little Underwood Universal portable, made in 1947 — a joy to type on, and the only carriage-shifting machine I have.

I’ve discovered the joys of portables. I’ve also discovered the joys of antique stores. Whenever I have an errand in one of the towns anywhere nearby, I now make it a point to seek out the shops that sell antiques. In my experience so far, they’re always run by nice people who love well-built old things and enjoy talking about them. Some group their typewriters all together, and some like to leave them scattered throughout the store, which is like a treasure hunt. No, I usually can’t buy any, now that I have nine. There are one or two kinds I’d like to add to my collection someday. But I am blessed with a good working “fleet.” Still, I really enjoy seeing what’s out there and cheering on those who have rescued them from attics and estate sales. 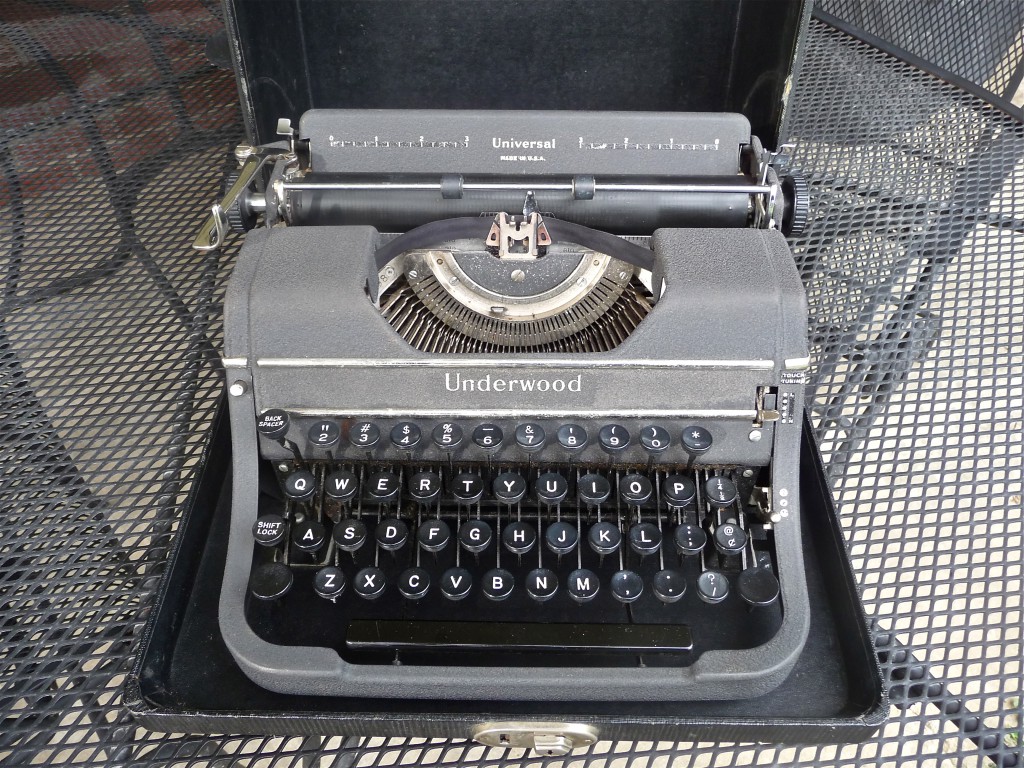 Awhile back I introduced you to my Olympia, a West German typewriter. Here’s our other immigrant: 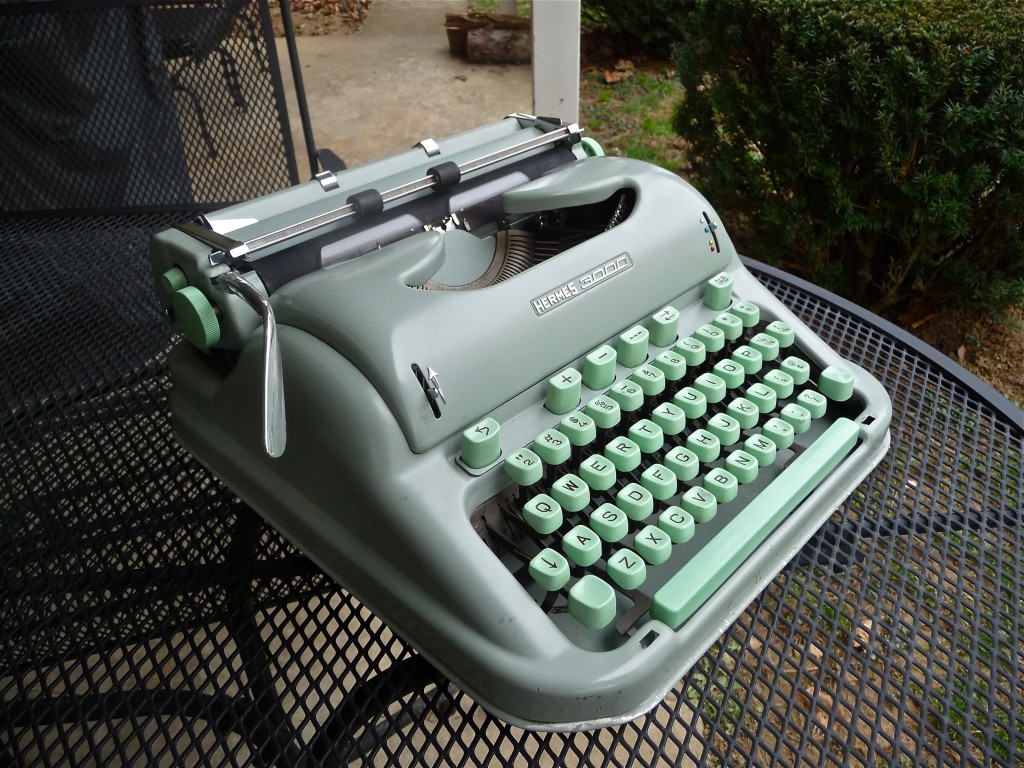 Hermes 3000, made in Switzerland, 1963. Some collectors aren’t wild about this famous “sea-foam green.” I like it, because it’s very sixties, and it sets the Hermes apart from the crowd.

Hermes 3000. I can hear a certain classics professor of ours reminding us, “Mythology is alive; mythology is ubiquitous.” (I wonder if the Romans call this typewriter the Mercury MMM . . .) 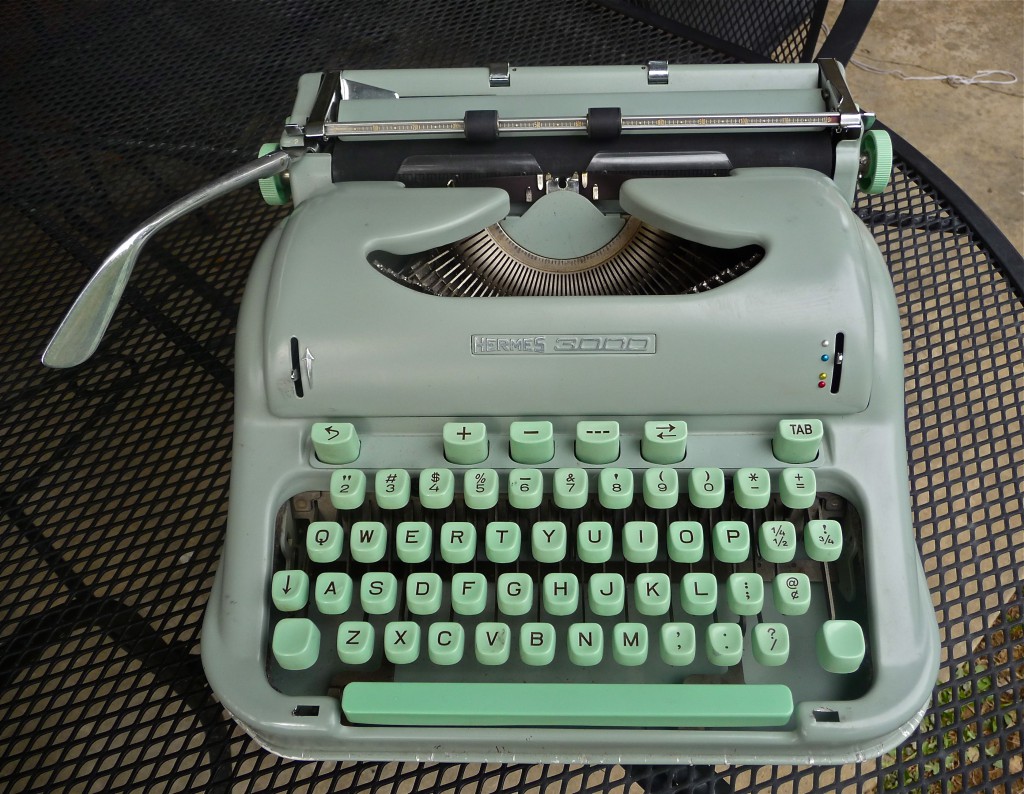 The smooth, “buttery” action of the Hermes is a delight! When I was cleaning this typer up, I found a small, dry, red leaf deep inside it. I wonder if its previous owner also liked to write in parks. And where was that park? Maybe this little green wonder has written fantasy novels before.

I didn’t properly introduce the third member of our august buffet board: 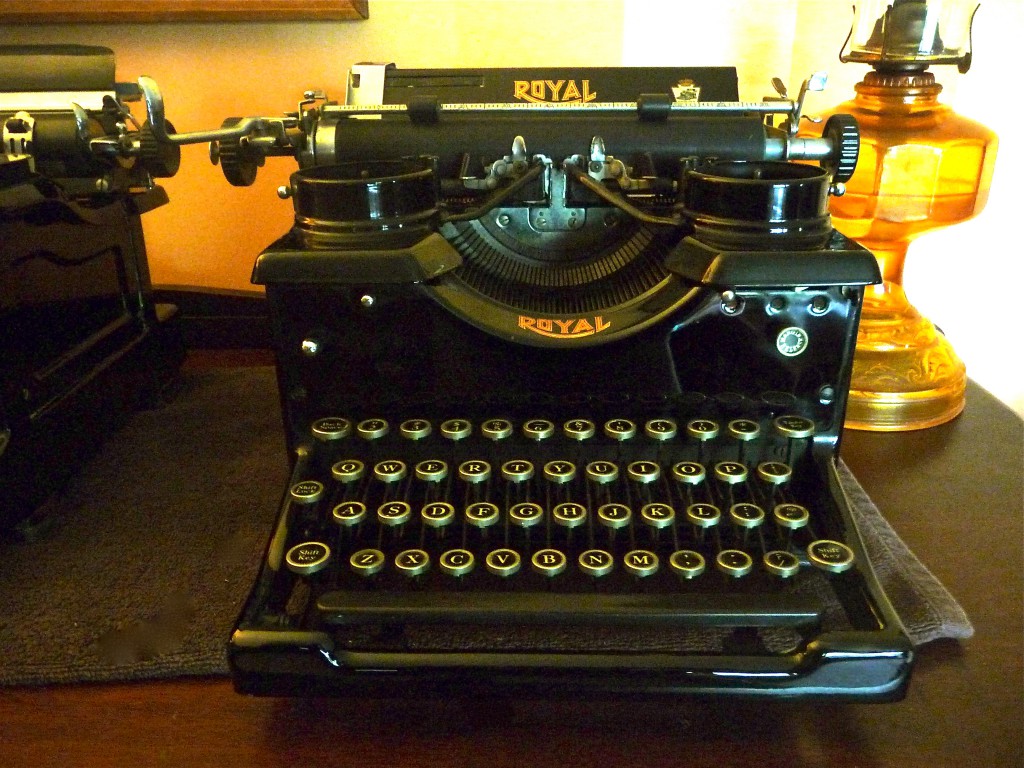 Boy, did I have fun cleaning up this beautiful old Royal and its neighbor on the left, the L. C. Smith 8 11 from 1935. I used rubbing compound, then polishing compound — heavy-duty metal cleansers. I went through rag after rag, taking off the decades of cigarette smoke and grime (perhaps dust and oil). I would work forever on one tiny spot, and STILL the rag was coming away dark brown. Finally, when the grime was off, I applied liquid Turtle Wax and buffed them like crazy. Now they look more like they were meant to — like they looked in those days of yore when Indiana Jones was obtaining rare antiquities, Tolkien was happily stacking up pages about silmarils, and darkness was spreading over Europe. 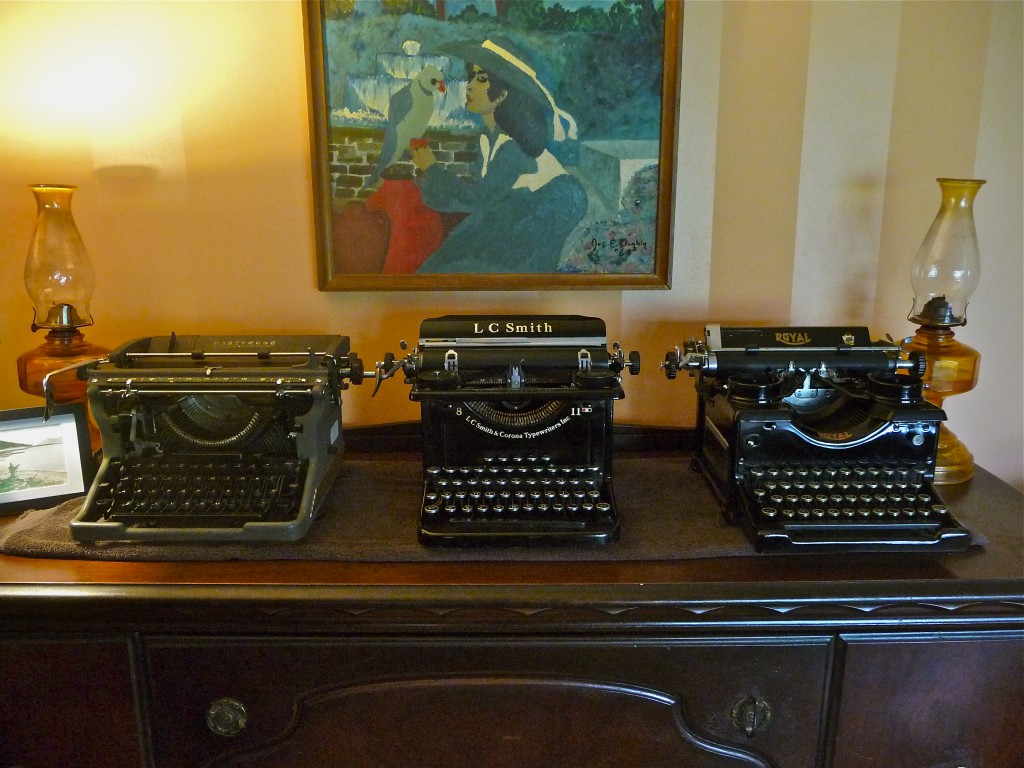 Speaking of Tolkien, I read an article yesterday about how he also had a fondness for typewriters. He had a Hammond Varitype, which used a type shuttle instead of typeslugs like most typewriters use; the shuttle moved around much like the typing ball in the IBM Selectric of later years, and a hammer struck the paper from behind, forcing it against the ink and the rubber shuttle. (The shuttle could be replaced, and Tolkien liked using the italics version for the songs in his books.) In his own words: “I like typewriters; and my dream is of suddenly finding myself rich enough to have an electric typewriter built to my specifications, to type the Feanorian script.”

Now here’s my labor of love: 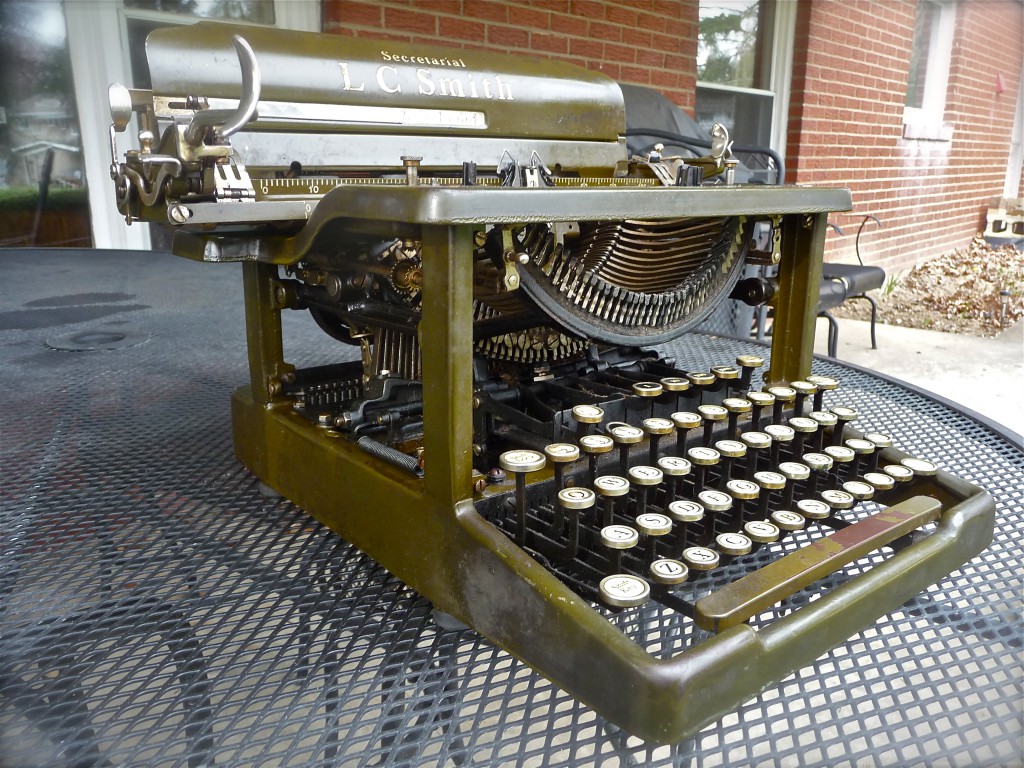 It’s a work-in-progress, a fixer-upper. Today I treated the platen with brake fluid to soften up its outer layer. The first night I worked on this venerable relic, I learned that PB B’laster, wonderful though it is, is an outdoor product. 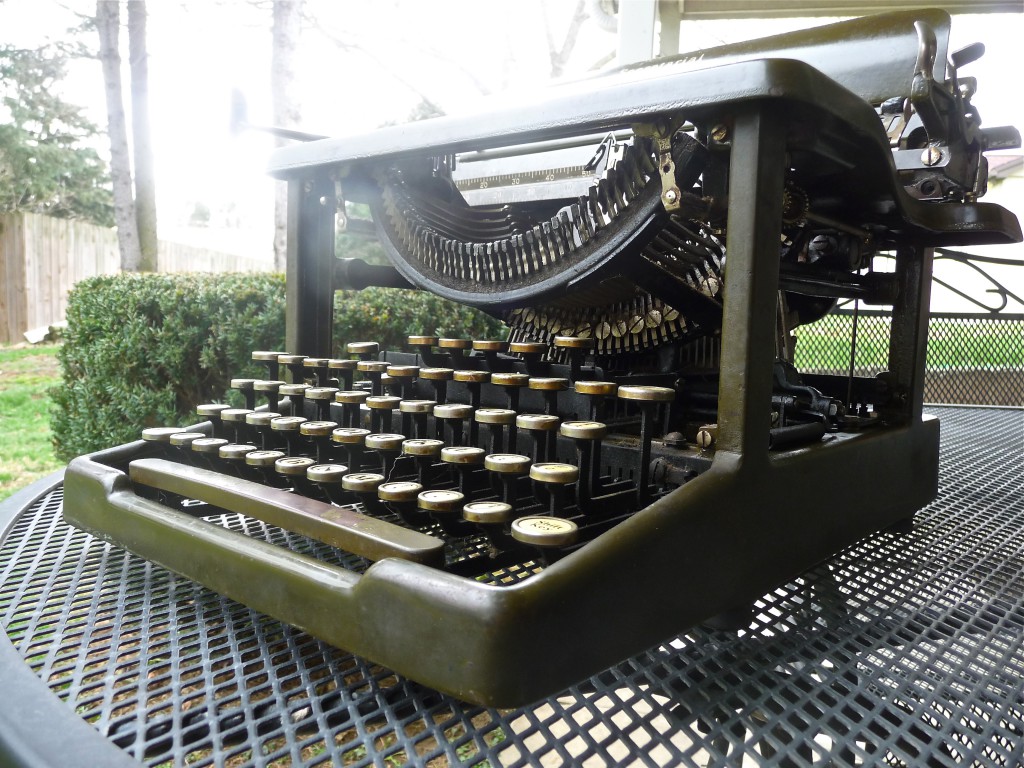 My next step is removing the carriage. Something is wrong with the escapement on this one. The carriage sticks, which could mean there’s something blocking it. The main spring is functional, which is a good sign. Who knows? I may be one screw-twist away from triggering a message summoning Obi-wan Kenobi for help! He may be our only hope . . .

Will this Smith type again? I can’t say for sure, but I’m learning all I can and not giving up yet! 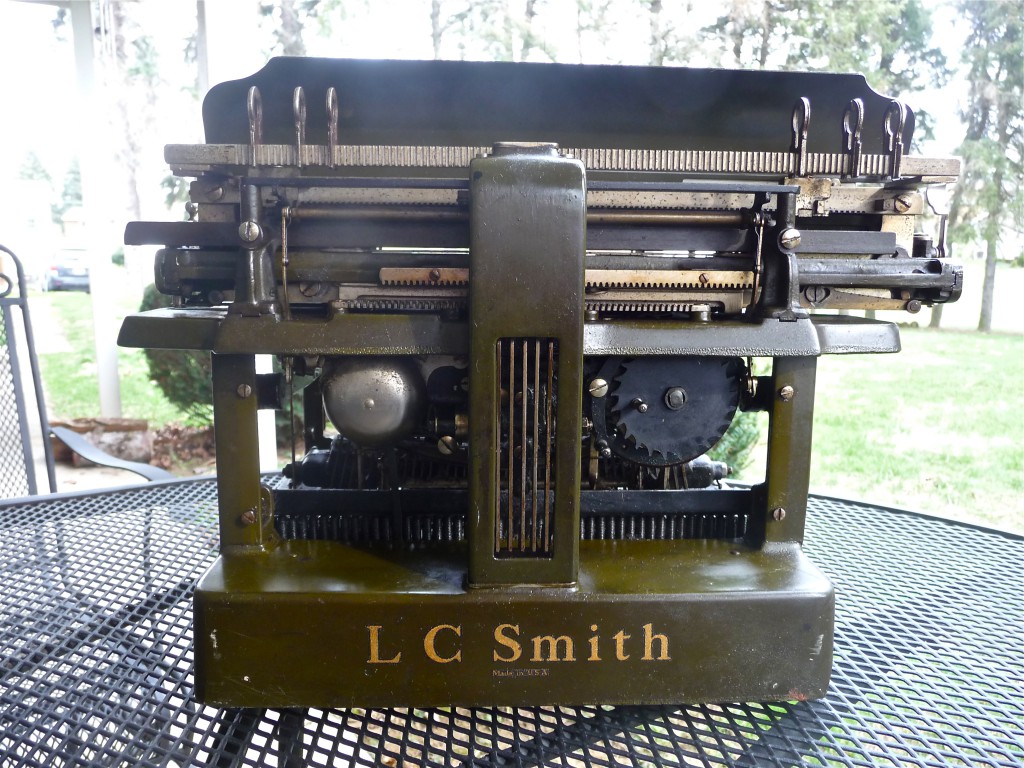