Before we get started, here are two books I’ve been meaning to tell you about! 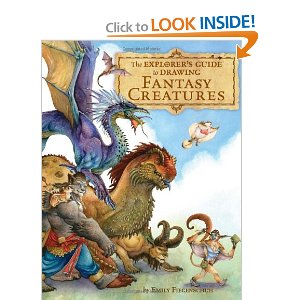 For anyone who has a young, budding artist at home — or who knows one — or who would like to learn to draw fantasy creatures him/herself, this is the book to have! The Explorer’s Guide to Drawing Fantasy Creatures is by Emily Fiegenschuh. You’ll remember her as the artist of “The Star Shard” in Cricket — she who enabled us to see Cymbril, Loric, Miwa, Urrt, The Thunder Rake, and all the other characters and settings of the story. (I urge everyone to visit Emily’s web site at http://www.e-figart.com, where you can find galleries of many wondrous images, including a section dedicated specifically to the art of “The Star Shard.”) But anyway, this book is receiving rave reviews. It’s a user-friendly, wise, exuberant, step-by-step, entertaining, extremely helpful manual for learning to get those fantastic visions onto the paper or canvas in all their expressive, gesturing, glowering, enchanting glory!

Here’s another really cool new addition to the canon of fantasy: 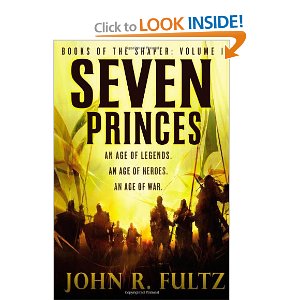 The first of The Books of the Shaper, by John R. Fultz

Seven Princes is the first part of The Books of the Shaper trilogy by John R. Fultz. I’ve interviewed John twice before on this blog; just type his name into the search bar, and you can revisit those insightful discussions. I happen to know that John is the real thing, a stellar, kind, generous, wise, and noble friend. But that’s not why I’m recommending his book here. I’m doing it because he also knows how to write. If you like fantastic worlds and epic struggles brought to life on a large, vibrant canvas of language, this is a book you’d love. John goes beyond the tropes and conventions of big fantasy; he makes them his own with original twists, and he always, always tells a human tale, the story of characters that engage us. He asks some pretty big questions and allows Story to illuminate the path toward answers. John R. Fultz. Seven Princes. Orbit Books. This book is on store shelves now!

Groinnk! New subject: mythology is indeed alive and ubiquitous, and Pittsburgh has its own remarkable statue of Pan! 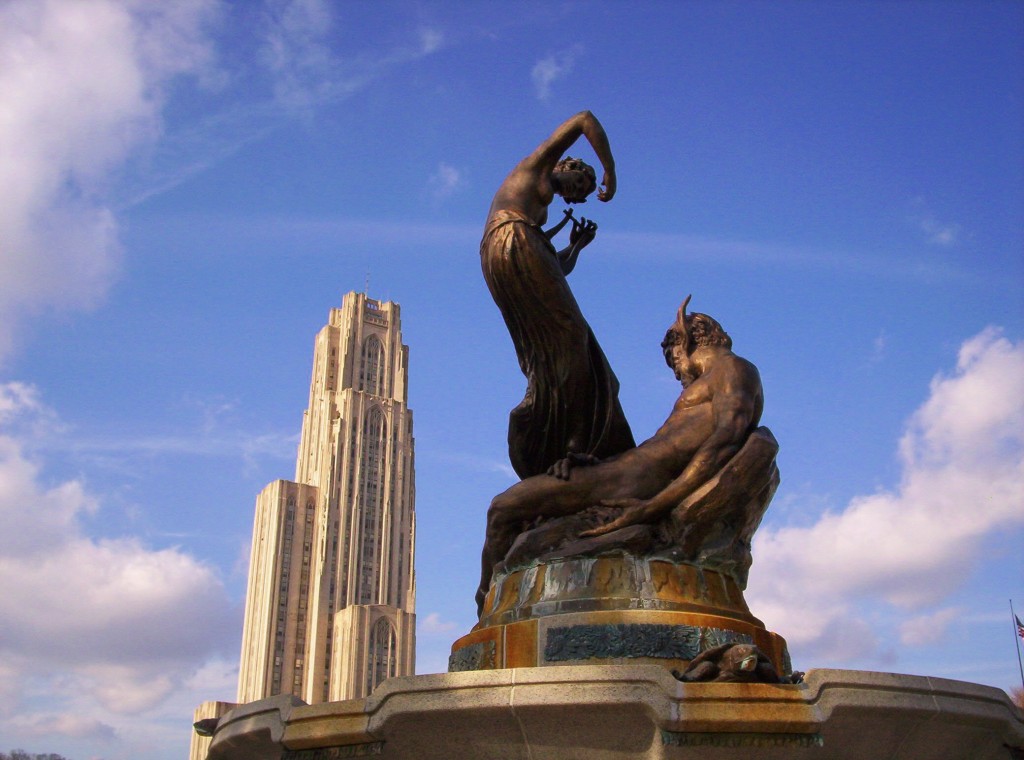 A Song to Nature, a statue in Pittsburgh

The construction of Pittsburgh’s Schenley Park was made possible by a gift of 300 acres from Mary Schenley. In 1911, a design competition was held to create a memorial in her honor. In 1913, the winner was announced: A Song to Nature, sculpted by Victor David Brenner, best known for designing the Lincoln penny.

Pan is serenaded by Sweet Harmony.

The statue was dedicated in 1918. Described as “a happy combination of poetry and passion,” the statue depicts Pan the earth god being serenaded by the nymph Sweet Harmony. At the time, the figures represented culture’s power to tame nature. 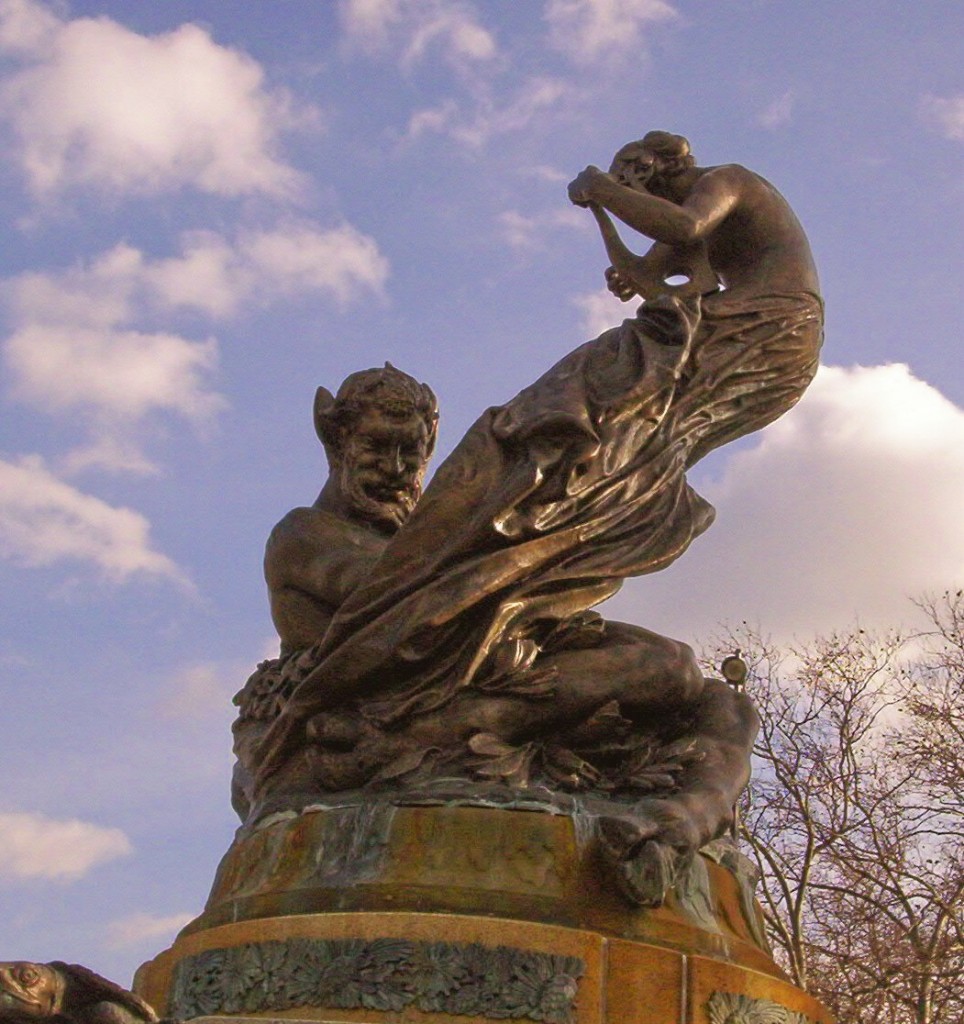 The statue’s architect, H. Van Buren Magonigle, used as the sculpture’s foundation the old Bellefield Bridge, which had been buried during the filling of St. Pierre’s Ravine. So this is yet another instance of the newer Pittsburgh springing from the bones and roots of its past (as in the case of my bookshelves). 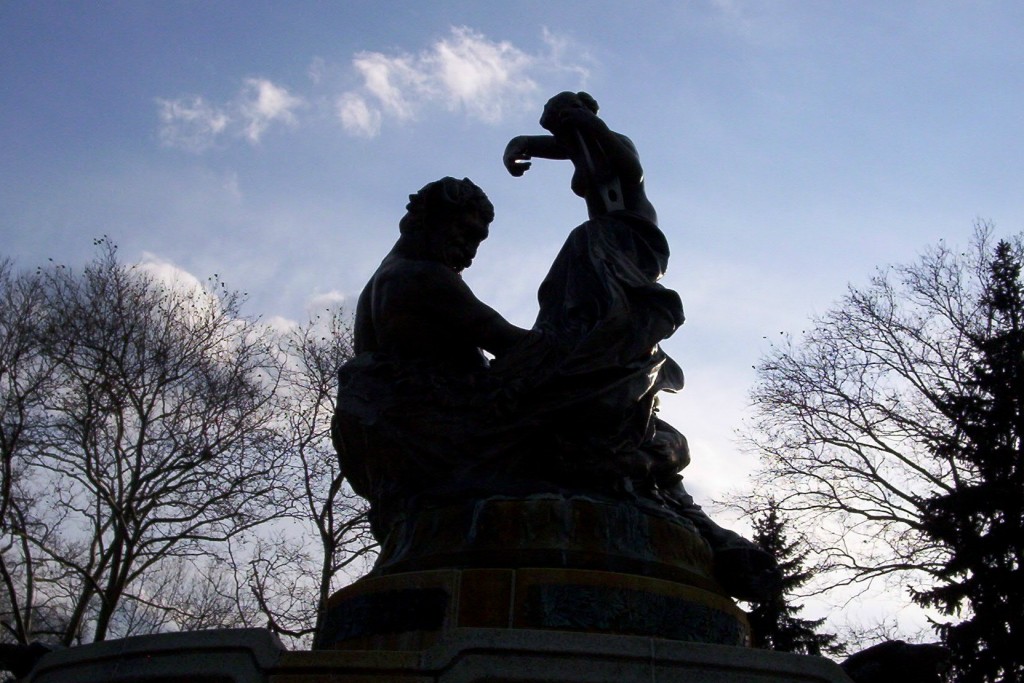 A Song to Nature, designed and sculpted by Victor David Brenner

“What was he doing, the great god Pan,

Down in the reeds by the river?” 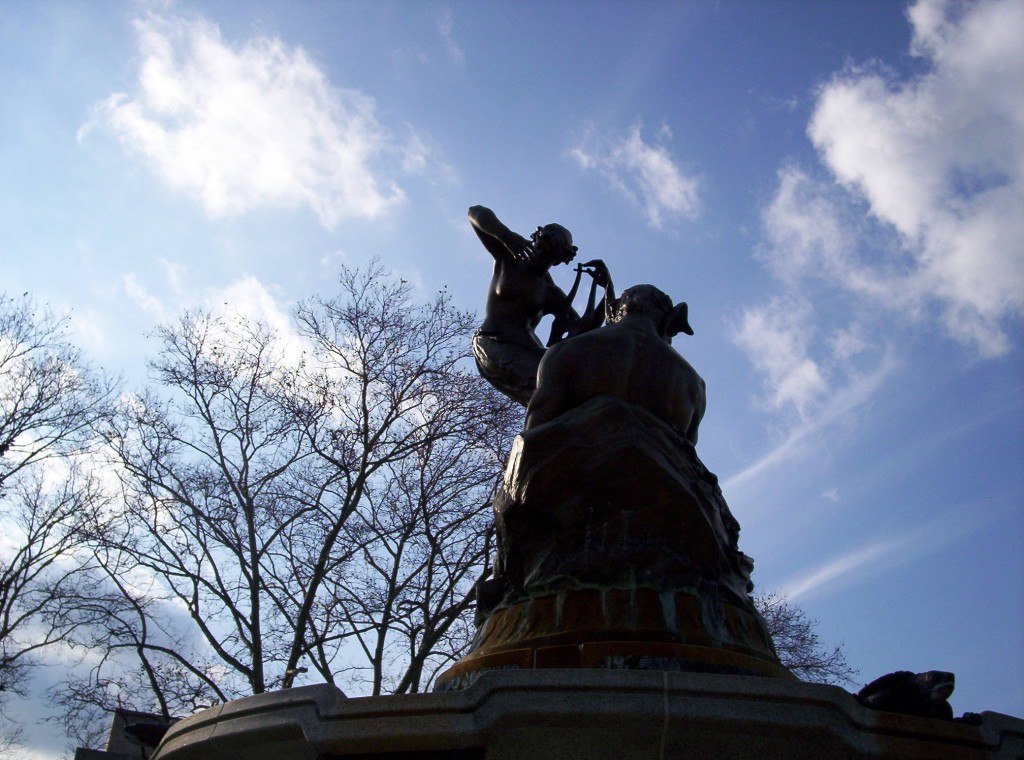 The statue stands outside the main Carnegie Library in Pittsburgh.

Splashing and paddling with hoofs of a goat,

And breaking the golden lilies afloat

With the dragon-fly on the river.”

— from “A Musical Instrument,” by Elizabeth Barrett Browning 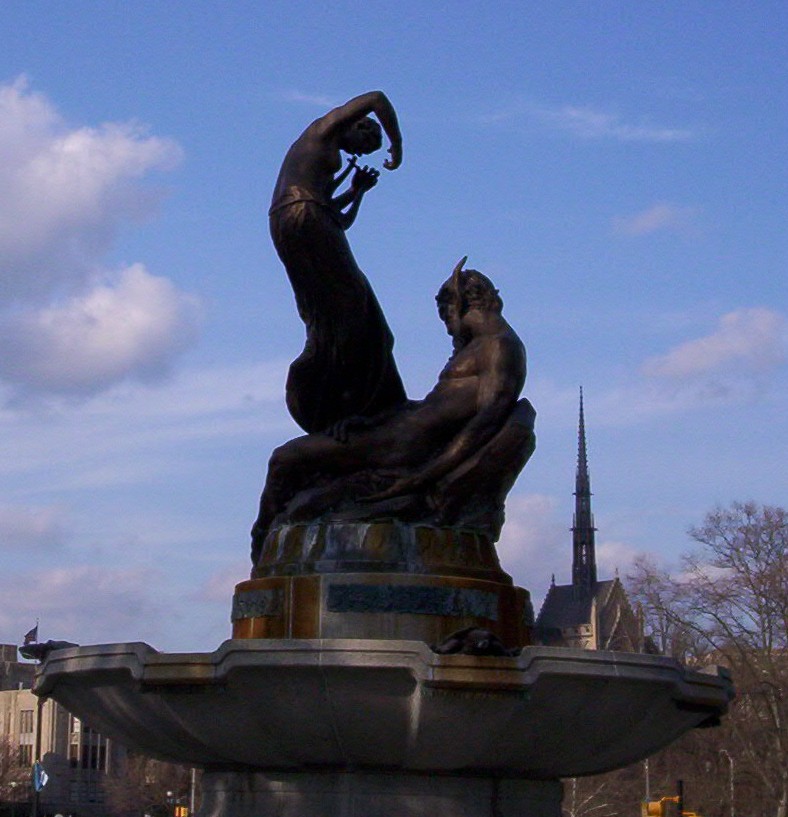 — from The Wind in the Willows, by Kenneth Grahame 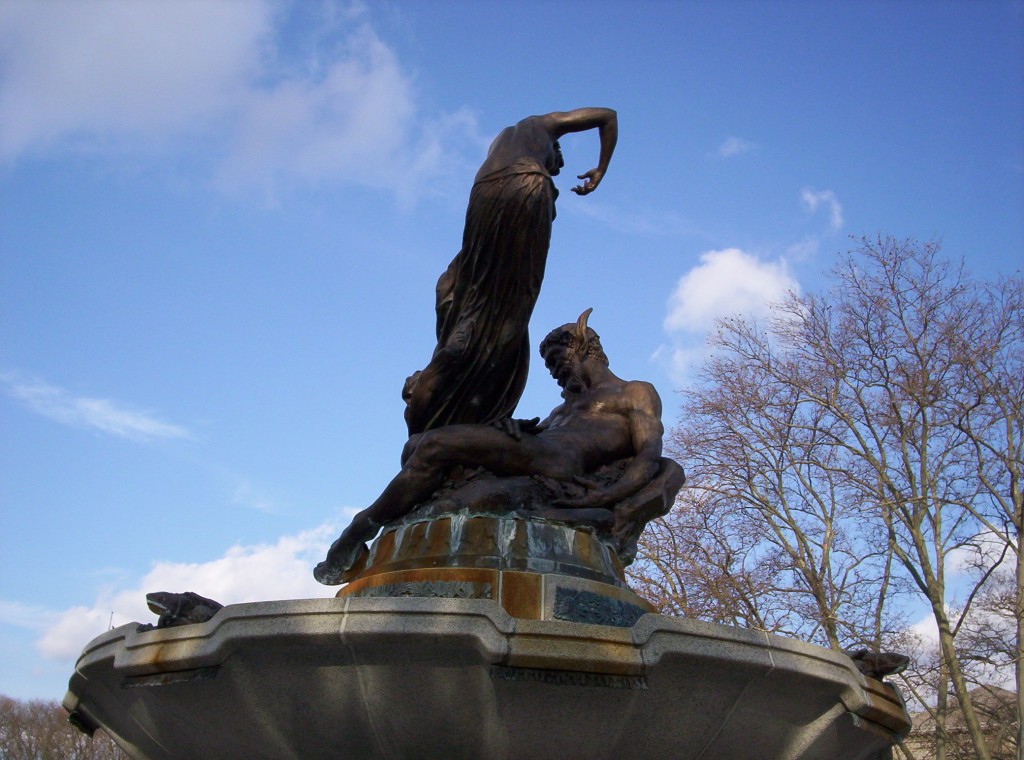 In the background stands The Cathedral of Learning: 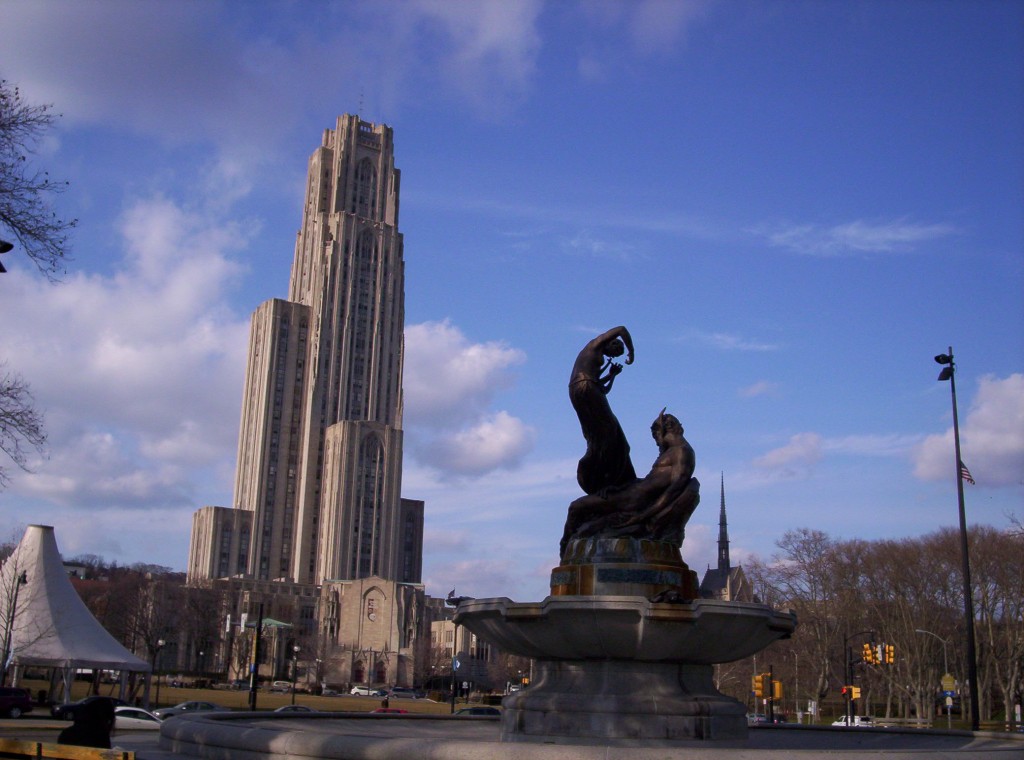 Almost like the eroded natural spires of the American West it appears: The Cathedral of Learning in Pittsburgh.

Here’s a view from inside the Cathedral. 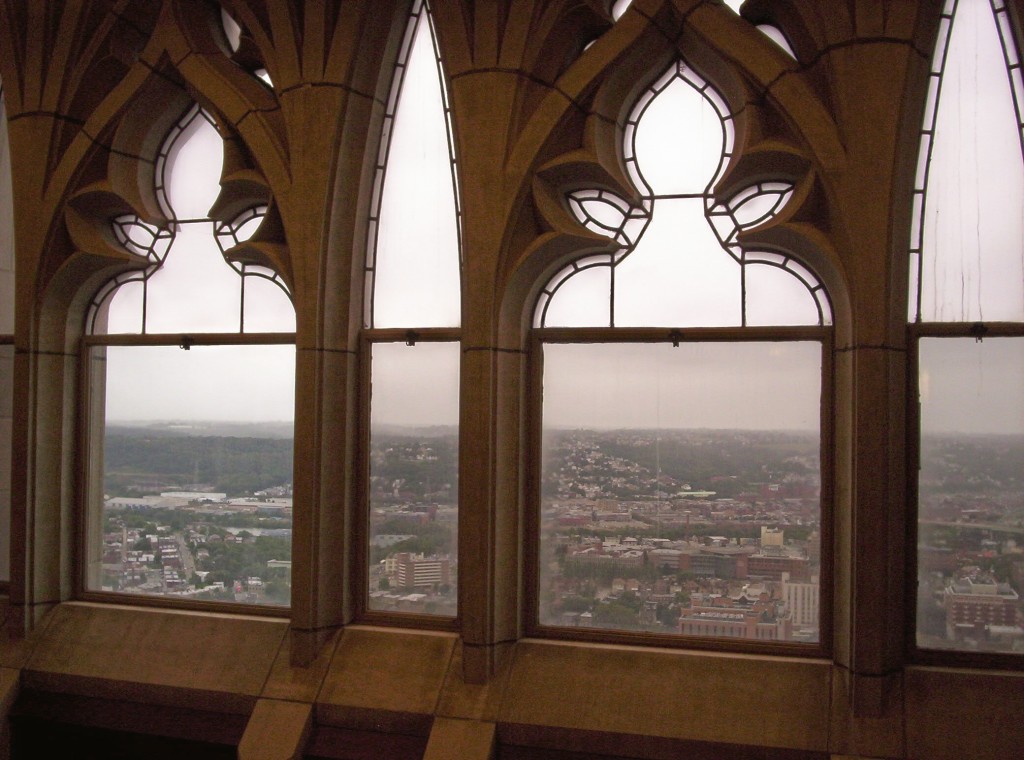 And looking down on the city: 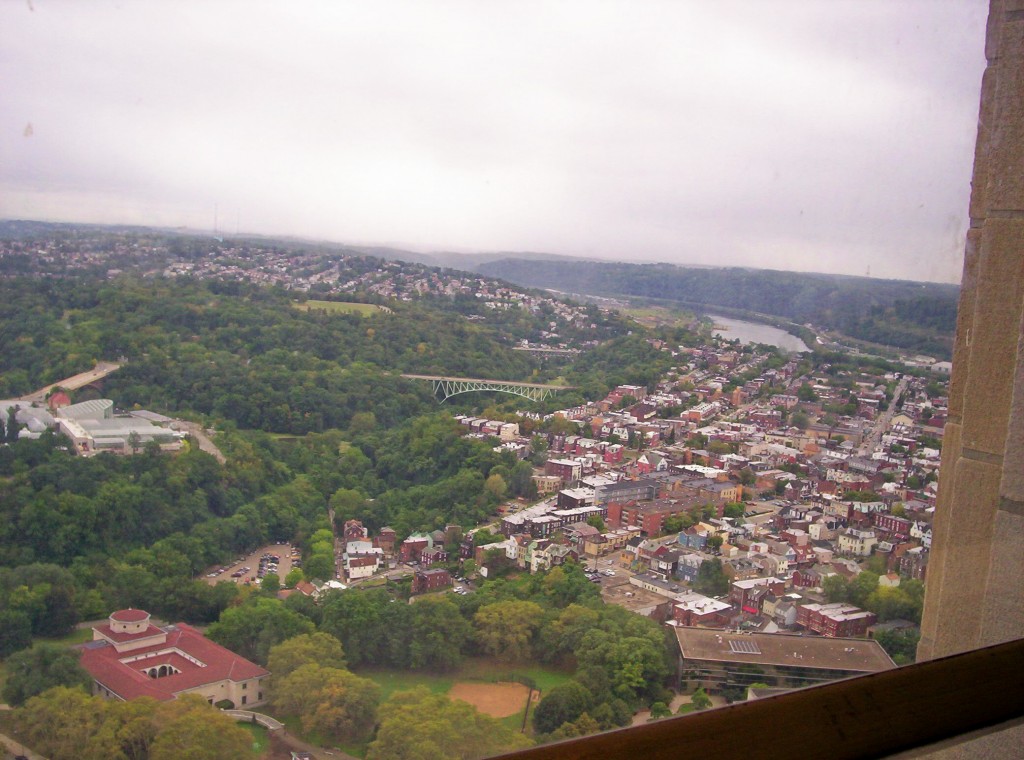 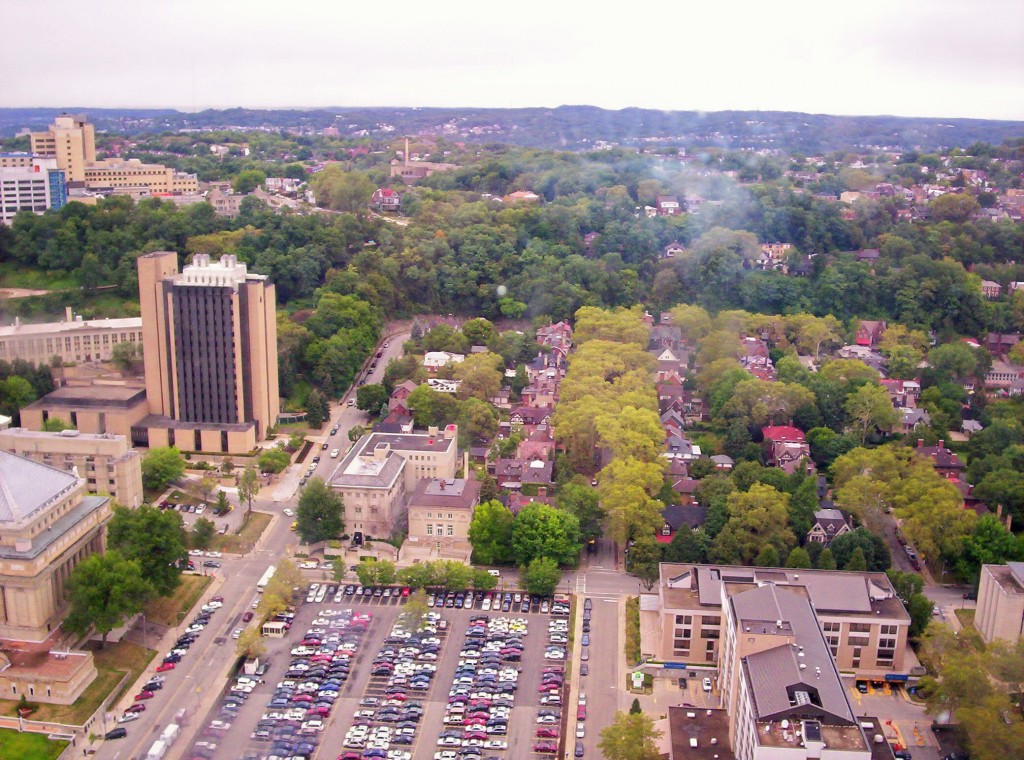 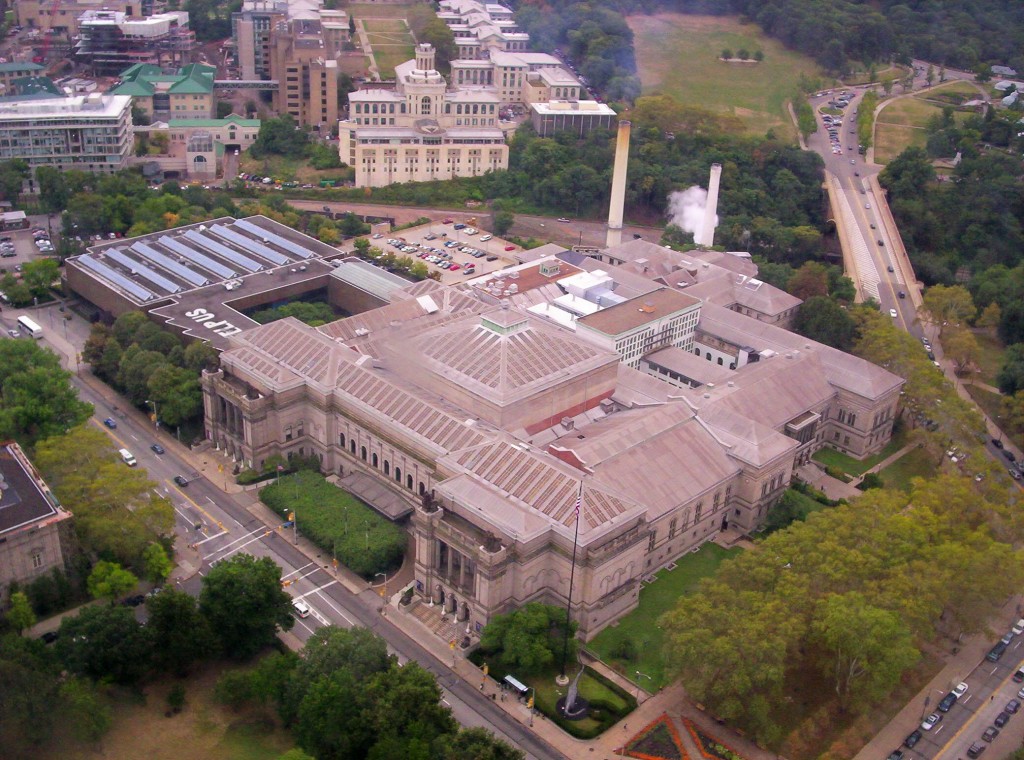 The Carnegie Library as seen from The Cathedral of Learning

So here’s my idea of what to do with that last ARC. For a reading experience, you’re now much better off with a copy of the finished book. But the ARC is a piece of history — a collector’s item if the book does well — or a very eccentric collector’s item if it doesn’t. If someone would like to win it, here’s what I suggest.

This “contest” requires no problem-solving, no decoding, and it’s completely on the honor system. There’s no way of verifying what you claim. This contest will close on March 15th, the Ides of March. The winner will be the person who recommends The Star Shard to the most people by midnight at the end of that date. Here are the rules:

1. I don’t think mass-mailings should count. I’m not encouraging or rewarding spam here. You can’t write one announcement and send it to everyone in your address book, either electronically or on paper. These must be one-on-one human contacts, but yes, they may be written or electronic. If you write a heartfelt letter or e-mail to someone specific, that counts.

2. To count the recommendation, you have to say more than “Buy The Star Shard.” You have to tell the other person something about the book and why s/he might like it.

4. Ditto with a bookstore. If the owner is going to order copies to stock because of your recommendation, five points.

5. If you are speaking formally to an audience (in a live setting) and you deliver an impassioned recommendation of this book, yes! — you can count every audience member. You’ve recommended it to them all. (Shouting to the crowds in a bus terminal or on a busy street doesn’t count.)

6. If you post an ad for the book on your blog or web site, count that as five.

7. This is retroactive, so if you’ve already recommended the book to some people according to the above rules, you can count those toward the contest.

8. As with the previous contest, if you already have an ARC of The Star Shard but choose to take part in this contest anyway, and if you win, you and I can decide together to which other player the ARC should go.

I’m signing off for now. Best wishes and blessings to all!

16 Responses to Pittsburgh’s Own Pan